Would you like to switch to the accessible version of this site?

Don't need the accessible version of this site?

Feeling “rattled” about snakes this Summer? Let’s take a bite out of the myths… 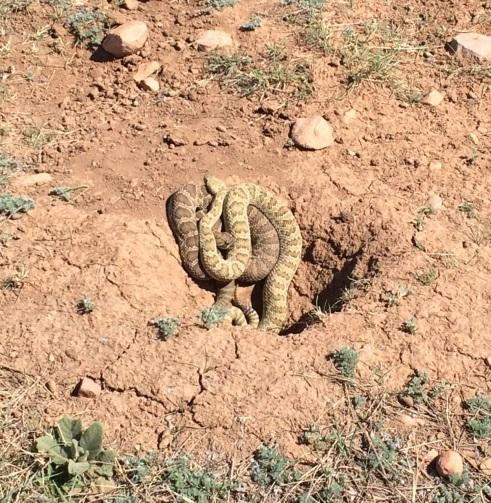 Prairie Rattlesnakes basking outside their den near Fort Collins

Rattlesnakes pass the winter months in solitary or communal hibernaculum in Colorado. Once ambient temperatures reach an average of around 60 degrees, these snakes will awaken and leave their den to sun themselves and seek food sources. This usually starts around April in most of Colorado’s Front Range. Most commonly, they will bask in the sun on rocks and pavement along trails and roads. Unfortunately, these are the same places where we like to recreate. Although Prairie Rattlesnakes are not a particularly aggressive rattlesnake species, if inadvertently stepped on or if made to feel threatened they will strike out.

How to prevent a bite:

By far the best way to deal with rattlesnakes is to avoid them. Because the Prairie Rattlesnake is more active during dawn, dusk, and into the night, these are good times to avoid taking to the trails. Because rattlesnakes like to hang around rock outcroppings and prairie dog towns, it is important to be especially cautious when rock climbing or scrambling and to keep your pet on leash when hiking while avoiding prairie dog towns. If you do happen to encounter a snake, stop and slowly back up. Allow it to go its own way or find a different route around the snake. Do not engage the snake and make sure that you have a secure grasp on your dog’s leash so that curiosity does not get the better of Fido! Since dogs are very nosey and inquisitive, they are commonly bit in the face.

Some trainers offer rattlesnake avoidance classes which use live bullsnakes as well as dead, “re-animated” rattlesnakes. These classes usually employ shock collars which are used when the dog approaches the snakes to implant a negative association with the snakes. There can be negative repercussions from using shock collars in dogs and most progressive trainers and behaviorists do not recommend using them. A good alternative option is to find a trainer that focuses on good recall and “leave-it” training, which increases the bond between the owner and their dog and does not use negative reinforcement. Still, the best way to ensure that your dog does not mess with a rattlesnake is to keep it on a short leash while out in rattlesnake country.

What if a bite occurs?!

Prairie Rattlesnake venom is classified as primarily “hemorrhagic,” meaning that it causes bleeding, low blood pressure, extreme pain, and swelling in its victim.  These bites can be fatal in some circumstances especially if a large dose of venom enters the bloodstream. Even still, it is believed that approximately 1/3 of bites are actually “dry bites,” which do not contain venom.  If your dog is bitten, the key is to keep your dog calm and immobilize the bite region if possible (such as on a limb) to lessen the venom circulation. Seek immediate veterinary attention!  Carry your dog to the car if you are able since this may help keep the venom at the bite location.  Do not place a tourniquet, try to suck the venom out, or in any way disturb the bite area!

What happens after we get to the veterinary hospital?

Treatment for dogs consists of primary stabilization including: intravenous fluids, pain medications, anti-inflammatories, and anti-venom injections (depending on the time period).  Occasionally patients will also need antibiotics if there is a lot of dying or damaged tissue. Not all veterinary hospitals have access to anti-venom but most emergency facilities do.    While there is a rattlesnake vaccine on the market, which is based on the Western Rattlesnake venom, this is significantly different from our Prairie Rattlesnake venom and generally not recommend for patients in this area.  Most dogs respond well to early intervention to minimize tissue damage and the prognosis is usually fair to good with treatment.

Find us on the map